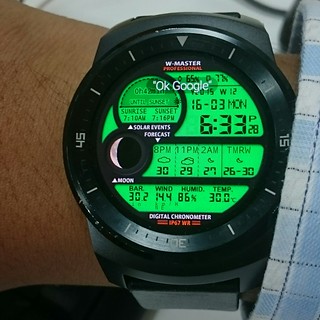 Well, Apple is overpriced but how you will disagree that they has the ultimate design innovation talent! Sometimes it feels like all the consumer innovations are only coming from them. Recent days Google pretends many things but their only intention is the sell ads to the consumer.

Many of my friends know that I am an early adapter, so if I am fascinated about something, I get it despite of all challenges. When Android Wear came, I thought this is the most innovative step from Google and Android team. I bought a LG G watch R back in January, which is currently running Android Wear 5.0.2. I feel so sorry for the device and the operating system. Let me highlight some of the points one by one.

Not even a Remote Control for your phone: Say you want to play music on your phone and control that from your watch, what things you would like to do? Definitely you would not like to skip tracks and control volume, a $50 Samsung phone’s headphones can do that. You may like to look into the playlist and then play the tracks you like or manage your queue etc. Unfortunately this Android Wear cannot do beyond what that $50 Samsung phone’s headphones can do.

No Playlist: No matter what media player you are using on your phone, there is no option to browse through the playlist on your watch. So you cannot just tap on your song and play it, you have to trust on forward/next options. I found only Sony Walkman and Google Play Music are the only apps that the phone supports. If your watch has internal memory (Sony, LG and Huawei does) you can download your selected playlists on your watch and play them directly on a Bluetooth device. But on the same case you are not allowed to browse the playlist and directly play the track you want to!

No Contacts, Calling: I was expecting I would be able to call someone right from my phone. The feature is there but only if you are connected to Google Now cloud services and if they can understand your pronunciation. You may want to call home, they will call mom. That is what happened with me.

Well, calling became so challenging because there is no contact list you can see from your watch. Say, I am wearing the watch and my phone is connected to my car’s speakers (AUX), if there is an incoming call, I can see who is calling and I can take/reject the call right from the watch. Now if I want to call someone it will be super challenging. You cannot browse the contact list and just tap to call someone. I have no clue why Google did not think about this simple feature but this is what it is.

Cannot Rearrange Apps: Say you like and use Google Keep a lot and want to access the app easily from the app menu. You are not lucky, you cannot re-arrange the apps, have to access them as they are.

Disappointing Google Now: You know there is nothing called Google Now, right? The information you see on Google now are already backdated, e.g. game results. The weather Google Now shows are few hours old. So Google Now is not Now, it is may be Google’s now not ours. It is not watch Google Now, for every platform it sux big time.

So that is my honest opinion about Google’s latest innovation! At this point we can only hope things will get better in coming days else Apple will dominate this market too.

Well, for one thing, you definitely want a good battery life, considering the fact that phones these days are resource hungry. You want a good camera, because, you have high chances of running into photo opportunities on the go. Where is your camera when you need it? It’s right there in your pocket. Mobile cameras used to be something that can take photos where you can barely make out that there is something or someone resembling a human being standing in front of the camera when you are shooting. Now, mobile cameras have become something that can easily beat a regular point and shoot camera. But, here, too, the megapixel race like the regular cameras have come into play and often high megapixel doesn’t mean good photo quality. Low light sensitivity still is not up to the mark in mobile cameras.

Ok, let’s get back to the point. People put reviews on high end mobiles on the net all the time. I’m writing on Chinese phones from Symphony. What is Symphony? Ever heard of it? You may have, if you are a Bangladeshi. You may not have, if you are not. So, what does Symphony do? They are like some lesser known mobile handset companies like Micromax, Blu, Xolo, Spice, Karbonn, Celkon, verykool….. and countless other names you may find in GSMArena (ww.gsmarena.com), one of the trusted sites to check phone specs.

What all these handset companies do, is they bring their phones out of cheap Chinese factories that can afford to give high specification phones for very less. The phones these days can give you Quad Core processors with 1.5 GHz+ speed [Chinese brand processors], 1 GB + RAM and high capacity internal memory of as high as 16 GB (as of July 2013). We don’t know what they are going to bring in the coming days, but they are getting bolder and bolder. So, the names I mentioned above just make their phones and imprint their names on the phones and import them from China. Hence, most of the mobiles look similar. A great number of these phones are rebranding done on a certain less known Chinese brand, Gionee. But in fact, they are not the exact copies of the Gionee phones. Phone companies modify the stuff under the hood according to their budget and requirements. The Chinese factories are more than happy to comply.

I actually started this review on the Symphony Xplorer W125, which I used for something like 3 months, before I fell for a new model, the Symphony Xplorer ZII (Zed two). It was not like the W125 was giving bad service or anything. Actually it was a superb phone. But the new model was too irresistible. END_OF_DOCUMENT_TOKEN_TO_BE_REPLACED